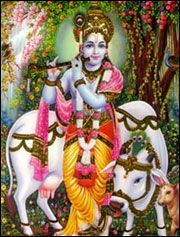 Krishna is the eighth incarnation of Lord Vishnu and was born in the Dvarpara Yuga as the "dark one". Krishna is the embodiment of love and divine joy, that destroys all pain and sin. Krishna is the protector of sacred utterances and cows. Krishna is a trickster and lover, an instigator of all forms of knowledge and born to establish the religion of love.

In the epic poem the Mahabharata, Krishna plays a major role that serves as the starting point for a change in Hindu practice. In the poem, he serves as the charioteer for Arjuna, who is about to go into battle against many of his relatives.

As Arjuna sits dejected knowing that to be victorious he must slay his half-brothers, Krishna delivers his celebrated oration, the 'Bhagavad-Gita' (The Song of the Celestial One), on duty and life to the troubled hero Arjuna. This speech persuaded Arjuna that although he was torn by loyalty, it was right to fight against his kinsmen since they were unrighteous.

Krishna expounds a philosophy of right action being the ideal path of salvation, as opposed to relying on ritualistic sacrifices and idol worship as a means of salvation. He states that while yoga and devotion might lead to oneness with God, righteous conduct is better since it helps in both the spiritual and material worlds. The two former methods, Krishna notes, were only focused on the spiritual worlds.

Chant when in trouble and the Lord is with you.