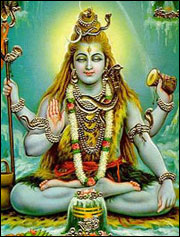 He is the third member of the Hindu trinity. He is the God of Destruction. When the religiosity has fallen to such low standards in the world, that it is no longer worth living, He destroys it in order to enable a new creation filled with 'dharma'. He is also known as "Nataraj" - Lord of the Dance - who dances the world into and out of existence.

The Lord's attributes represent his victory over the demonic activity, and calmness of human nature. As is seen in other places in Hindu religion, Shiva shows the union of opposite principles which make him a representation of the totality of life. He is at the same time

Lord Shiva has matted hair that holds the flowing Ganga river and a crescent Moon ; a cobra snake coiled round his neck, a Trishul (trident) and Tiger skin cloth and ashes all over his body. Shiva-Linga, a sign of the Lord is adored instead of him and Shiva temples have ShivaLinga as the main deity. In ShivaLinga, God is sought to be represented as having form as well as without form; Saguna as well as Nirguna.

The symbolic significance of Shiva's body :

His arms: In one of his upper arms, Siva holds the kettle drum (damroo) whose sound symbolizes creative energy. The other upper arm holds the fire pot of destruction. The lower right hand shows abhaya (Do not fear) mudra . The lower left hand points to the Lord's lifted foot saying "Your salvation lies in worshipping my feet !"

At the base of the crown of hair on Siva's head is a skull - this is symbolic of Siva's destroying energy.

The crescent moon on his head ( Siva is Chandrasekhara) signifies Siva's grace and also Time.

His third eye stands for omniscience or wisdom.

On his right ear, Siva wears makara-kundala, signifying the male principle and on the left, the tatanka (being Ardhanarisa) denoting the female principles.

His necklace of skulls of Brahma, Vishnu and others proclaim that he is the arbiter of numberless creations and destructions

The ashes smeared all over his body are symbolic of purity. It reminds us that in the love of transient Samsara we should not lose sight of the God. The body will end up in ashes.

Beads of Rudraksh he wears represent the solidified tears of pity Shiva sheds at the woes of his bhaktas.

He wears the Upavita or the sacred thread consisting of 96 strands representing the 96 tatvas , this represents that he is the arbiter of all actions.

The Tiger skin he wears on his loins tells us that we must strip ourselves of ahankara or pride which is equated to the tiger.


It is the mantra of Lord Shiva. Chant so that impurities, anxieties and doubts are destroyed. Lord Shiva bestows his blessings immediately on the devotee.