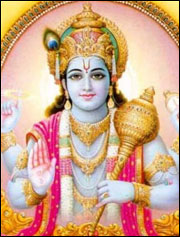 He is the second member of the Hindu Trinity.

He is said to be the Preserver/Sustainer of life, especially because of His association with the principles of order, righteousness, and dharma (truth/nobility).Whenever these principles are threatened, and religion is endangered on the earth, He comes out of His transcendence to assume an earthly form, and incarnates on the earth to restore the principles, and save His devotees.

He takes on an earthly form and becomes incarnated. He is also known as Hari, the remover of sorrow, and Narayan.

He is described having a dark colour representing the passive and formless ether , a great quality for a pervading God.

There are a total of Ten incarnations (avatars) of Vishnu. These include

a fish (Matsya), tortoise (Kurma), man-lion (Narasimha), boar (Varaha), dwarf (Vaman), Parasu-Ram, Rama (of Ramayana), Krishna, Buddha and Kalki, who is yet to come. He has four hands :

One hand holds a discus (chakra) which is a reminder of the wheel of time, and to lead a good life,

The fourth hand holds a mace (gada) indicating the power and punishing capacity of the Lord if discipline is broken.

Out of his navel blossoms a lotus which holds Brahma, the God of Creation whose responsibilities Vishnu has assumed.

His vehicle is Garuda , the swift flying bird - which can spread the Vedic knowledge with great courage. He is often depicted reclining on a coiled and many headed cobra (sheshnag) which rests on the cosmic waters. This represents the sleeping Universe.

Lord Vishnu's consort is Goddess Lakshmi, the Goddess of Wealth.

Lord Vishnu's most celebrated incarnations are Rama and Krishna. That is why, in India, Rama and Krishna are the most worshipped entities, people are not worshipping multiple Gods, but different forms and expansions of the same God.

The mantra of Lord Vishnu. Any thing in the world is possible by worshipping lord Vishnu, who sustains the life in world. Enchanting this mantra saves a devotee from many troubles. It bestows the devotee with prosperity, peace, wealth etc.

Do not miss Dasavataram, The ten incarnations of Maha Vishnu.