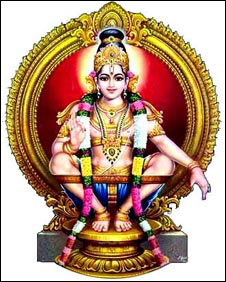 In the months from November to January (15 Nov - 15 Jan), a small hill shrine in the southern tip of India, Kerala attracts millions of devotees from all over the world. This temple situated in the Sahyadri Hills in the Western Ghats is known as Sabarimala and the presiding deity is Lord Ayyappan or Lord Aiyappa. The pilgrimage to Sabarimala is a singular example of a pilgrimage where pilgrims, without consideration of caste, creed, position or social status, go with one mind and one `mantra' dreaming constantly of the darshan (sighting) of the Lord Ayyappa and to seek his blessings.

Unlike other temples where you can walk in any day during the puja or offering timings, Sabarimala pilgrimage is undertaken after a strict ritual 'Vrath' (austerities) for 41 days. It is believed that the 41 days Vrath purifies one's soul and brings him closer to God, as epitomized by the concept of 'Thatvamasi'- that is, oneness of God and self. The period of Vrath is called the 'Mandala Kaal'. After the 'Mandala Kaal', devotees undertake pilgrimage to the Sabarimala temple.

The Legend and History of Ayyappan

Lord Ayyappan was born out of a crisis that overtook the gods. Asura king Mahishasura had a boon that no men can destroy him and he was creating havoc in the world. Blessed with invulnerability to all men, the gods then sent a woman, the goddess Durga, to fight and kill him. The gods succeed in this mission and Mahishasura was destroyed.

Mahishi, sister of Mahishasura therefore began performing a fearsome set of austerities, and so surpassed all records in that grim tapasya or askesis, that Brahma The Creator had really no option but to give her the boon she wanted. The boon she sought was to be invulnerable except to a being that had the combined strength of both Shiva and Vishnu. Since such a person did not exist, she thought she was safe and as other asuras started the conquest and plunder.

The gods ask Lord Shiva and Lord Vishnu to save them from this catastrophe. The two great gods really do not know what to do until from the ever-active mind of the great Vishnu comes a possible solution. When Vishnu had taken the Kurma Avatar, he also had to manifest himself as Mohini, the enchantress, to save the nectar of immortality from the demons who were not willing to share it with the gods. If he became Mohini again, then the female Mohini and the male Shiva could have the divine child who would combine their powers and beat Mahishi. Thus was born Lord Ayyappan.

The divine child was left on the banks of the Pampa River. King Rajasekhara of Panthalam (in Kerala), who belonged to the Pandya dynasty of South India, while hunting heard the crying of the child found lying on the banks of the river, with a radiant face and a olden bell tied around his neck. The King, who had no child of his own, took him to the palace and brought him up as his own son. He was named Manikanda because of the gold bell found around his neck. (Mani means bell and Kanda means neck).

After this, the Queen also conceived and gave birth to a son. Both sons grew up in the palace as brothers. When the time came to decide on the heirapparent, the King nominated Manikanda as the Crown Prince (Yuvaraja). bUt due to the conspiracy of the Chief Minister, the Queen favored her own son. The both hatched a plan to get rid of Manikanda. She feigned sickness and prevailed upon the palace physician to prescribe a medicine which included the milk of a tigress. Manikanda was assigned to the task of milking the tigress and was sent out to the forest. It was the intention that he would be killed by wild animals in the process.

The King advised Manikanda to take along a coconut of tri-netra (three eyed coconut) to represent Shiva in order to protect him and some food items to sustain him till his return, in a cloth bundle known as irumudi which was to be carried upon his head.

While wandering in the forest of Sabari, the battle between Mahishi and Ayyappan took place at the bank of Azhutha. Lord Ayyappan killed Mahishi. Mahishi's soul emerged and was redeemed from a curse sustained from her previous life when she was known as Leela. She requested Ayyappan to marry her and take her as his consort. But he declined, being a celibate. However, he promised that she would be visited by pilgrims and would be housed next to his temple, but promised that if the number of new pilgrims visiting him stopped, then he would marry her (however the number of pilgrims increases every year).

This place is now known as Malikapurathamma shrine. Manikanda returned to the palace, using Devandra the king of Devas, to take the form of a ferocious tigress and riding on it accompanied by a fleet of tigresses. The King and the Queen realized that Manikanda was an avatar and prayed for his mercy.

Filled with emotions of happiness, grief, fear, wonder and 'bhakti' (devotion to God) and self-surrender, the king stood praying for the mercy and blessings of Manikanda. He repented he could not fully visualize the truth of the divine powers of the Lord and repeatedly requested him to forgive him for behaving like a father. The Lord lovingly embraced the King who prayed to bless him by freeing from his ego and the worldly life of birth and rebirth and grant 'moksha’ (salvation).

The Lord then enlightened the King on the path of attainment of salvation. He shot an arrow that fell at the top of Sabrimala and told the King that he could construct a temple there, north of the holy river Pampa and install His deity there. Ayyappan also explained how the Sabarimala pilgrimage shall be undertaken, emphasizing the importance of vrata and what the devotees can attain by His 'darshan'.

The Lord further consoled the King saying that the devotees who held him and his descendants in 'bhakti' shall happen to be devoted to him as well. Manikandan then blessed the King and all others assembled there, and vanished. The King duly constructed the temple at Sabarimala, dedicated to Him. The deity for installation was prepared by Parshurama, an incarnation of Lord Vishnu, and was installed by himself.

Listen to Harivarasanam, the hymn dedicated to Lord Ayyappa.

For the temple opening and closing dates, please visit this link.