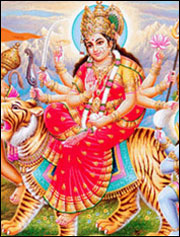 The festival of Teej is Celebrated mainly in the Northern India (Rajasthan, Chandigarh etc) in the month of August. The celebrations of Teej has its origins in a legend of Goddess Parvati in Hindu mythology. This is the day Goddess Parvati reunited with Lord Shiva after she went through hard-core tapasya or penance and took her 108 births on the earth. It is said that she failed to have Lord Shiva as her husband till the 107th birth, but in In her 108th birth, Lord Shiva realized her devotion and love for him and accepted as his wife. It is believed that invocation of Parvati’s blessings on this day results in continued marital bliss.

Teej is a women's festival, Teej falls on the third day of the bright fortnight of the month of Hindu calendar Shrawan (July-August). The images of Goddess Parvati or Teej Mata are decked up in new clothes and jewellery and worshipped. Then the images are taken out in ceremonial processions escorted by caparisoned elephants, camels and horse drawn chariots, as the bride Parvati leaves her parents home for her husband's. The devotees line up to catch a glimpse of the deity and seek the blessings.

Teej is also known as a swing festival. Swings are hung from trees and decorated with flowers. Young girls and women colourfully attired, swing on them and sing songs in praise of Goddess Parvati and the monsoon. They decorate their hands and feet with henna in delicate designs. The popular belief is that darker the henna the more a man loves his woman. Girls engaged to be married receive gifts such as a dress, henna, lac bangles and sweets from their future in-laws and married women, from their husband.

As with other Hindu festivals, there is a social angle to these celebrations. The significant being the strengthening of the relationship between married couples. Women who observe fast for the long life of their husband and marital bliss in earnest devotion feel closer and more committed to their husband. While watching their wife straining themselves, husbands feel more special and committed. They reciprocate by being more loving and caring towards their wife.