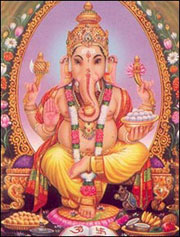 Ganesha is the God of success and overcoming obstacles, but is also associated with wisdom, learning, prudence, and power. As the god of success, his names are chanted at the start of any important venture. As the remover of obstacles, he is invoked at the start of every journey, marriage, religious rite, house construction, the writing of a book or even a letter.

Every element of the body of Ganesha has its own value and its own significance:

The fact that he has a single tusk (the other being broken off) indicates Ganesha’s ability to overcome all forms of dualism;

The wide ears denote wisdom, ability to listen to people who seek help and to reflect on spiritual truths. They signify the importance of listening in order to assimilate ideas. Ears are used to gain knowledge. The large ears indicate that when God is known, all knowledge is known;

the curved trunk indicates the intellectual potentialities which manifest themselves in the faculty of discrimination between real and unreal;

on the forehead, the Trishula (weapon of Shiva, similar to Trident) is depicted, symbolising time (past, present and future) and Ganesha's mastery over it;

Ganesha’s pot belly contains infinite universes. It signifies the bounty of nature and equanimity, the ability of Ganesha to swallow the sorrows of the Universe and protect the world;

The position of his legs (one resting on the ground and one raised) indicate the importance of living and participating in the material world as well as in the spiritual world, the ability to live in the world without being of the world.

The four arms of Ganesha represent the four inner attributes of the subtle body, that is: mind (Manas), intellect (Buddhi), ego (Ahamkara), and conditioned conscience (Chitta). Lord Ganesha represents the pure consciousness - the Atman - which enables these four attributes to function in us;

The hand waving an axe, is a symbol of the retrenchment of all desires, bearers of pain and suffering. With this axe Ganesha can both strike and repel obstacles. The axe is also to prod man to the path of righteousness and truth;

The second hand holds a whip, symbol of the force that ties the devout person to the eternal beatitude of God. The whip conveys that worldly attachments and desires should be rid of;

The third hand, turned towards the devotee, is in a pose of blessing, refuge and protection (abhaya);

the fourth hand holds a lotus flower (padma), and it symbolizes the highest goal of human evolution, the sweetness of the realised inner self.

32 Forms of Ganesh in Scriptures


The mantra of Lord Ganesha. A remover of obstacles and bestower of success.

You can also read about Ganesh Chaturthi-the birthday of Lord Ganesha.